To save you from these ordeals, we present a few common photography terms that you can learn in order to increase your grasp on the field of photography.

An aperture is simply the adjustable opening in the lens of a camera similar to the pupil in our eyes. When a photograph is taken, the camera’s shutter opens allowing light to flood in to the lens to capture a picture. By adjusting the aperture, we determine how big that opening should be.

F-stops are simply expressed as numbers with the letter “f” in front of them such as f/1.4, f/11, or f/22 on the camera’s LCD display. The smaller is the f-stop number, the bigger is the opening in the lens and vice versa. In other words, small number implies more light and big numbers imply less light. 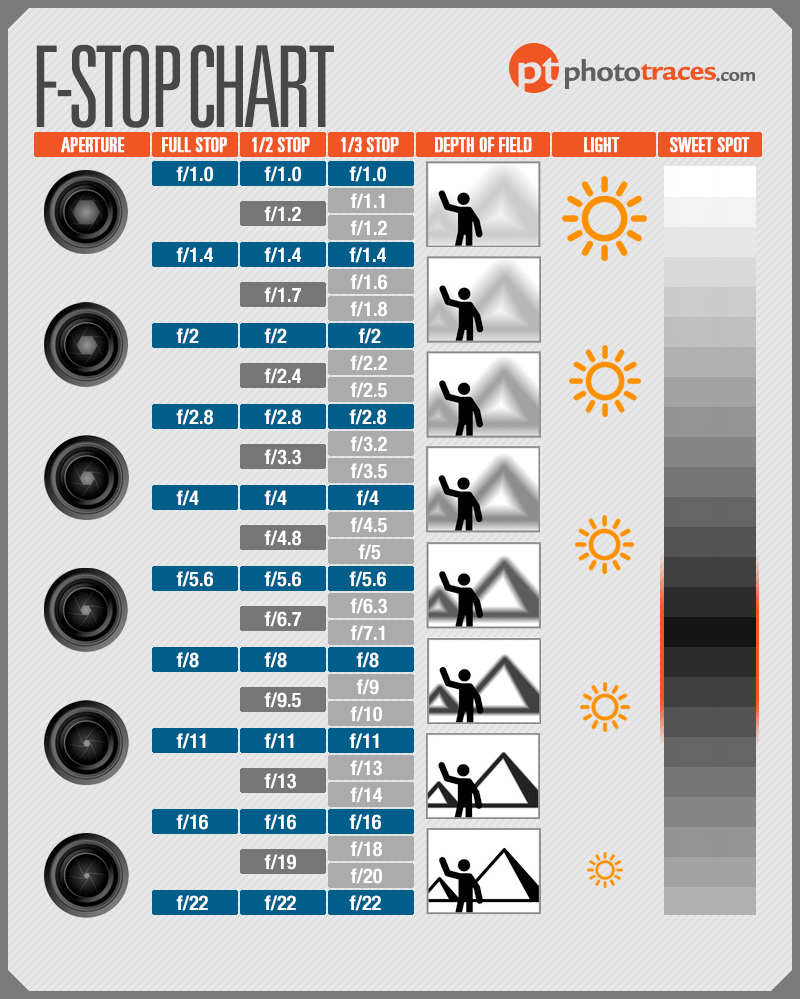 This term refers to the shape and format of the image produced by a camera. However, many digital cameras offer the option of switching between 4:3, 3:2 and 16:9.

Pronounced ‘boh-keh’, it refers to the out of focus areas of a photograph with limited depth of field particularly around, but not limited to the highlight areas. Depending on

BONUS READ: 10 Tips to Take Better Travel Photos | Be A Good Photographer With These Amazing Tips

the shape of the opening formed by the blades of the lens’ aperture, Bokeh appears as little circles in the non-sharp areas.

Similarly, a higher ISO setting implies higher light sensitivity. Another effect that ISO has on images is that the lower the ISO, the sharper the image, and the higher the ISO, the grainier the picture appears.

Also known as color fringing, it occurs when the collective color wavelengths of an image fail to focus on a common plane. The effects of chromatic aberration are mostly noticeable around the edges of high-contrast images near the edges of the frame. Mostly common on less expensive lens, the best optical lens can also show low effects of chromatic aberration under certain circumstances.

When aperture functions as the size of the opening of the lens, shutter speed is responsible for controlling how long that hole will remain open. For example, when we consider a fast moving train – the longer the hole remains open, the more movement it will be able to capture in its frame. Shutter speed refers to fraction of seconds expressed in numbers like 1/30, 1/250 or 1/2000.

The lower the number, the longer the hole stays open. A low setting shows more movement due to longer opening but it makes the picture appear blurry whereas a high setting though open for a short time, will produce a sharper image.

This intimidating term simply means making the image lighter or darker than its automatic light detector recommends. Positive exposure compensation lets more light into the lens and negative exposure compensation allows less light into the lens. This comes in handy when shooting in highly awkward scenarios like a sunset which allows you to alter the lighting according to its best use.

Often confused simply with the color white, many fail to take into consideration the variations of white – when white is ‘too warm’, it will appear yellowish. This occurrence is not the same for all cameras and the best way to find out is to take pictures of a white sheet and adjust its white balance to check if the white paper changes color in the picture.

Before a shooting, it should be made certain that the white you view in the screen is same as the white you see in front of you. However, generally the Auto White Balance feature takes care of the balance sparing you from the task of continuously adjusting the white balance.

This term is used to describe how much the image is in focus or in a blur.  The f-stop number controls the depth of field by determining how light is focused on the individual elements of an image. Shallow depth of field occurs when a picture is taken with focus in the foreground and blur in the background.

Now when we see the image of a large landscape going on for miles and miles with everything in focus from the foreground to the distant horizon, it is a large depth of field.  When a low f-stop is selected like f/2.8, only what is focused on will be sharp and the foreground and background will be out of focus. When a high f-stop is selected like f/22, all the elements will be crisp and in focus.